Sunset over Nyons and a grisly find on the journey home. 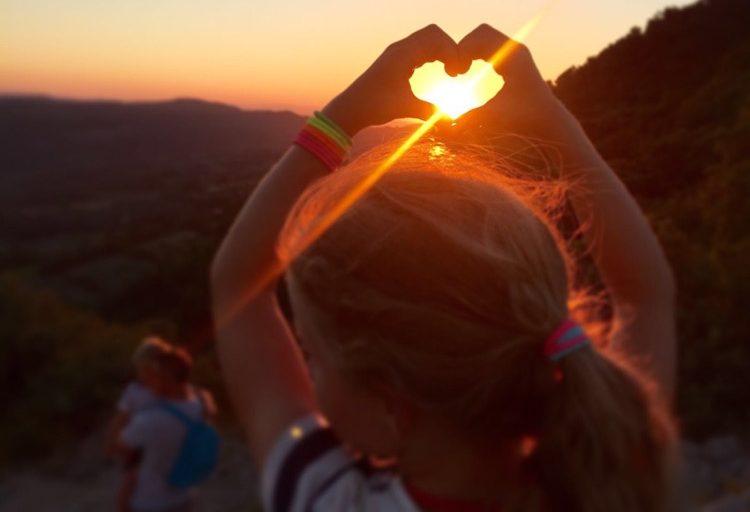 We settled the bill for the campsite and enjoyed another lazy morning getting showered and packing everything away for the journey back to Les Gets.  The kids were happily playing in the grounds of the campsite with their new French friends. Table tennis, table football, general running around and finally their first proper game of Boules.

With temperatures soaring, we drove back to L’Estagnol Beach to spend the afternoon by the sea. We’d been warned it was going to be busy down here at this time of year but this was ridiculous. The beach was completely full on Friday but today was Sunday and there were cars parked up to the entrance almost half a mile from the beach. There was even a queue along the road to get in. It didn’t take long to decide to knock it on the head and drive towards Marseille. We could stop if we found a quieter beach on the way. NO CHANCE! Absolutely rammed the whole way. A day on the beach had turned to a day in the car and we decided to just push on, head inland and maybe find something to do on the way…

Three hours later, we sat in standstill traffic on the motorway towards Lyon in 38°C heat. We decided to get off, turn east and head for the hills again. Naploeon and his 700 soldiers knew what they were doing. It is just too hot this way. It was a great choice for us. Once we got off, it was windows down along open roads and we just kept going until the kids’ stomachs piped up and told us it was tea time.

We stopped in a small town called Nyons on the edge of the Alpine foothills to grab a bite to eat. We were surprised to find that it was a buzzing little spot with an amazing atmosphere. There was a small band busking in the main romanesque square surrounded by cafes and restaurant terraces. We ordered pizza and chips from a small van beside a grand fountain with signs declaring ‘l’eau potable’. We’d slurped our way through a good deal of water in the heat today so we refilled our empty bottles and chucked them back in the van. We sat and ate our pizzas in the centre and watched life go by. Strangers wished us ‘bon appetit’ as they wandered by with their own Sunday night takeaways.

The evening took on a hazy glow as the sun descended. It struck us that having just crossed a flat plain to the west, if we could scale some of the Alpine foothills behind, we’d be in for a treat of a sunset.

I hit Google Maps on the phone, looking to see if there were any vehicle accessible veiwpoints. A look at the map in the tourist office window suggested that there was a place of interest at the top of one of the hills called Col du Pontias. I dropped a pin on the maps and with ice-creams in hand and some more gushing about how lovely the people here seemed to be, we saddled up and rolled off for the Col.

The road zigzags back up through vast olive groves and past idyllic small holdings. We had a hairy moment losing traction on one of the steep switchbacks with the tyres unable to drag the weight of the van and it’s pizza laden inhabitants up the slope. A bit of a run-up did the trick and not much further on we came to the end of the road.

There was no view from here due to the trees but there was a sign and a path disappearing up through the forest. The vote for a family hike was unanimous and we loaded up with water, torches and Smidge (midge and mozzie repellent). I dropped another pin on the map just in case. We didn’t last 5 minutes before the mozzies started helping themselves to a tasty banquet so we stopped and Smidged up. After about twenty minutes we reached the top of the ridgeline and a small church called Chappelle de L’Ermitage. Nina read out the interesting blurb on the wall which I forgot instantaneously.

There was a magnificent view down the next valley from here but we still couldn’t see back towards the sun. We walked on further and came to a rocky outcrop. A well trodden scramble got us on top and we were rewarded with a gorgeous view back over Nyons and across the plains to the west. After 10 minutes or so, the sun started it’s descent beyond the horizon. We tread the tightrope of trying to watch it go down with having a blob emblazoned on our optic nerve for the rest of the evening.

With the sun gone, it was time to get back to the van before we had to rely on torchlight. Both the littl’uns were starting to flag after a tiring week, a hot day and the hot sticky hike up. T refused to hold hands but after his third tumble he was happy to hold mine for the rest of the walk back.

We got back in the van and drove down the zig zags and back through town. We left Nyons behind and continued in the dark along the Gorges de Saint-May to find somewhere to pitch up for the night. It’s not easy finding somewhere to stay in the dark, especially to wild camp and we’ve made several ‘notes to selves’ in the past that we need to be settled before last light. On this occasion though, sunset trumped convenience.

We swept back and forth down the valley far enough to get a bit away from civilisation. The valley tightened into gorges and the sheer rock faces rose up above us. T had done as requested and was spark out. Iz, on the other hand, was putting in the usual stream of requests for food, drink, entertainment and situation reports. We passed a few rest areas and laybys and uttered in unison to one another “let’s keep looking”. We noticed a few tracks down to the riverside here and there and I decided to have a drive down the next one.

We crunched off the main road and slowly bounced down the rocky tree-lined track. This opened onto a flatter, stoney area surrounded by woodland which had evidently been used as an unofficial parking area. I turned the van around so we could use the headlights to scan the area. It looked OK, so I pulled us into the shelter of the trees a bit and jumped out for a better scout around with the torch.

I checked back up to the main road and down to the river beside us. I checked that we were on good ground and that there was no sign of high water marks above where we were parked. I wandered round the back of the van towards the trees on the opposite side of the open ground. After about 10 metres, I shone the torch down a cut-through towards the river. On the stones between the bushes, I could see two unusual looking heaps lying on the floor and what looked like dried pools of blood…

‘Shit!’ I thought. I hope it’s not a dismembered body. I had a quick check around me and moved towards it. As I got closer I could see it WAS a dismembered body (of some description). The first heap was a dark pile of intestines. I quickly had another scan in the bushes either side of me and stepped over it towards the second heap…

A severed head! But phew! A wild boar’s head. Still gross, but thankfully nothing more sinister. I assumed it must be the unfortunate quarry of a recent hunt. It had been butchered right there with the important bits removed and the rest left for the vultures (yep, there’s vultures). I thought I’d better check there weren’t any trigger happy redneck types in the area. I started moving back into the trees even further from our van. The torchlight suddenly glinted off the back of another vehicle. It was tucked away about another 15 metres into the woodland…

I did take a photo of the wild boar but didn’t want to put it on here in case it grossed anyone out (Mum). If, however, your stomach can take it and you want a look, click here.

Time for a new wild campsite!!

I walked back to the van scanning with the torch and with my ears on red alert. T was still fast asleep and Nina and Iz were now lit up inside the van like a beacon in the dark with all 8 ceiling LEDs on full blast and Iz happily fiddling with the CD player. This had horror movie written all over it! I climbed into the driver’s seat and as calmly as possible said “belt up guys, I think we’ll have a look a bit further along.” Nina was puzzled: “This place is alright, isn’t it?” Me: “Well, I think there might somewhere a bit better further on. Turn the lights off, get your belts on and let’s go!”

Safely back on the tarmac, we started sweeping back down the valley. After we’d put in a good distance, a very nice picnic area presented itself. Not too close to the road and thankfully not too far away. A quick recce revealed no corpses, innards or pools of blood so we popped the roof, stuck up the black-out blinds and got ready for bed. As the kids fell asleep, I discreetly filled Nina in on the reasons for the sudden relocation. We cracked open a much needed 38°C can of Heineken chaud before hitting the sack ourselves.

Not the best night’s sleep and I was pretty happy to see the sun come up. We packed up the van quick smart and set the Sat Nav for Les Gets. 4 hours later and after a total of 1000 miles on the clock we were back home.

One thought on “Sunset over Nyons and a grisly find on the journey home.”