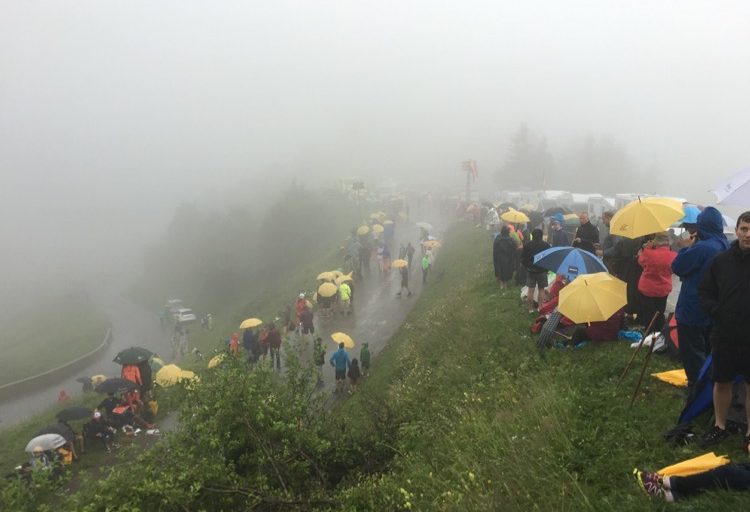 Well, that was a wet one! We’ve just got back from watching a seriously soggy Tour de France 2016 at the Col du Ranfolly. Our two little ones are now sitting, blue lipped, in a piping hot bath trying to warm themselves through.

First of all, massive congratulations to Britain’s Chris Froome (following tomorrow’s formalities on the final stage) on a successful defence and the taking of his record-breaking third Tour title. Congrats as well to Spain’s Jon Izaguirre for winning the stage and fellow Brit, Adam Yates for taking 4th place and the white jersey as the best rider under 25.

Our day started with us still undecided about whether to watch the Tour from the top of the lifts in Les Gets near the Col du Ranfolly/Col du Joux Plane or to battle the traffic and the crowds and watch the finish in Morzine. We put it out on Facebook last night and the general consensus was to head for the hills!

We packed snacks, drinks, extra layers and given the poor forecast for the day, full waterproofs. It was one of those days today where it was hard to get it right because it felt warm and muggy outside. You look at the ski jackets and think “nah, we’ll never need those”… We did!

The lead riders were expected to pass through the last cols at around 5 o’clock and the caravan of sponsors who throw goodies for the spectators was due at 3.00pm-ish. This is obviously the important bit for the kids, so we needed to get up there early and grab some freebies. First stop: Cafe Alba for top notch full English and Scottish breakfasts of champions. Done!

On to the Chavannes Express lift, a big queue and an ominous sign saying ‘lifts up only’. Hmmmm… We joined the queue, rode the lift to the top and walked on up to Lhotty’s restaurant at the Col du Ranfolly as the thunder made itself heard.

We set off to meet friends near the Lac du Joux Plane but the goody gang arrived early. We squidged in to the side of the road, waiting for our hand-outs like baby birds waiting for a feed. It’s fun but it always feels a bit demeaning scrabbling around on the ground competing for the freebies as they are hurled from the passing procession. I’ve got to say, Nina’s pretty good at it though and thanks mainly to her, we ended up with quite a collection. Coasters, caps, bags, Haribo, sausages and madelines. She took one for the team with a keyring smacking her in the side of the head but unfortunately a competing spectator swiped it off the floor while she was still dazed.

Right on time, the weather ramped it up to make life interesting. There’s nothing more relaxing than being stood near the top of the mountain during a thunder storm in torrential rain, holding a metal umbrella and surrounded by trees. I checked there were some taller people with brollies stood nearby. ;D

By the time the goodies were done, so were the kids. Both soaked to the skin even in their ‘waterproofs’ and shivering uncontrollably with purple lips. We added every extra layer we had but to no avail. Don’t worry kids, only 2 hours until the riders come through! We did the only sensible thing and walked back to Lhotty’s restaurant for hot chocolates and chips to warm everyone up. That did the trick nicely and bought us a bit more time. We found some decent viewing spots above the first hairpin of the descent from the col with views up to the high point and as far into the distance of the descent as we could see in the mist.

As more people arrived, the kids got elbowed out a bit but, unfazed, they resorted to running about and splashing in the mud and puddles (at least that’d keep them warmish). 20 minutes ’til the riders were due and T decided he needed a wee. That was the end of my carefully defended viewing spot… Nina lost hers moving over to chat to a friend she’d spotted and we reconvened a bit further round.

Then, after all the waiting and soaking, the chopper appeared through the cloud. We could hear the cheers of the crowd and the jingle of cowbells in the distance. A few seconds later, the leader Izaguirre appeared over the hill. He negotiated the corner beneath us, cafefully rounding it and disappearing off towards Morzine and the valley bottom. We watched more riders come through, keeping our eyes peeled for the yellow jersey of Chris Froome, for whom the British contingent gave a big cheer as he sped past.

Right, I thing we’ve seen enough! Shall we? Nina was now shivering as well and the kids were in tears. Some of the crowd had started to peel away so we got a strutt on to beat any queues at the chairlift… If we could use it… No such luck. “No descents”! We and the majority of people up there would have to walk the 400m or so of vertical descent back to the base.

We made it as far as the mid-station at Chavannes and decided that Nina and the kids should nip into La Croix Blanche for another warming chocolat chaud. I ran to the bottom and drove the van back up to collect everybody. I didn’t hang about and soon we were all on our way home dreaming of a hot bath. The run down was fun but my quads were pumped and I struggled to walk down the stairs just now.

Well, despite the weather and the challenges posed by doing anything with kids, that was a fun day out. Great atmosphere, great to bump into our friends out and about at an event like that and another memorable life experience! Once again, well done Chris!