We squeezed in a quickie up the Pointe d’Angolon, 2090m 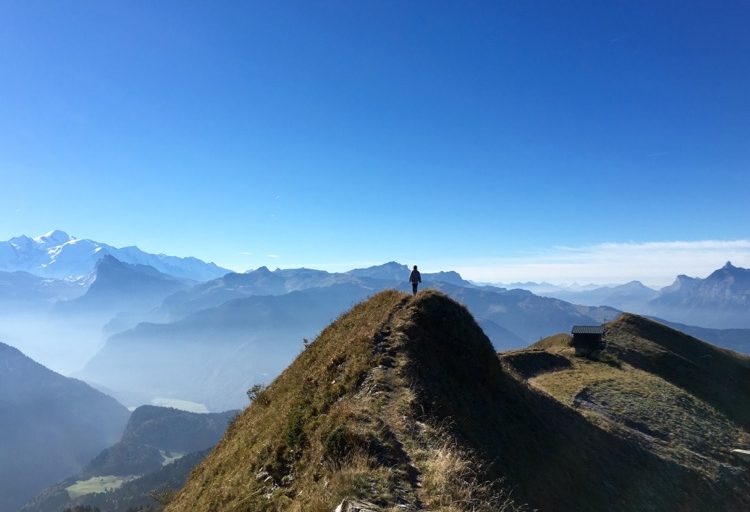 With wall-to-wall sunshine forecast for Wednesday and a sketchy outlook for the rest of the week, we decided to make hay while the sun shines and have a go at getting to the top of another local peak or two. Hopefully we’d get to the top of Pointe d’Angolon.

After dropping the kids off at school, we drove back down to Morzine before taking the road back up towards the Col du Ranfolly and over to Samoëns. We passed the turn off for the Nyon Plateaux where we’d hiked up Pointe de Nyon last week and wound up through the pine forest to the Col du Ranfolly.

We parked the van at the Lac de Joux Plane and set off up the track towards the top of the Chamossière lift. It’s a half day at school on a Wednesday so that gave us a little over an hour to walk out before we’d have to turn round and get back in time for pick up.

Heading out into the sunshine, we trudged up the stoney track, taking about 30 minutes to zigzag up the snowless ‘Arbis’ piste to the top of the Chamossière lift. After negotiating the footpath that ascends to the ridge-line, we were immediately rewarded with warm sunshine and incredible views over the backside. Our eyes were met with a most beautiful sight: the hazy mountains down towards Samoëns and over to Mont Blanc and to our left, the pinnacles on the other side of the Swiss border. We paused to appreciate it all before turning left towards Le Collu and the Pointe d’Angolon.

Our first real challenge came soon after a short hike up the ridge. As the path turned up a rocky outcrop behind one of the avalanche cannons, we were forced to undertake a pulse-quickening scramble. We’d seen these avalanche cannons all over the place but this was the first time we’d been up close and personal with one. I found out yesterday that they are connected to a gas supply which is remotely controlled, releasing gases into a mixing chamber. This is then ignited, firing an explosion out of the funnel, dislodging loose snow below and releasing any unstable snowpack. We were glad they weren’t doing any pre-season testing today!

We reached the top of Le Collu at 2066m and paused again to drink in the breathtaking vistas. A quick time-check revealed we didn’t need to turn back for another 10 minutes and the top of Pointe d’Angolon didn’t look too far away. Deciding to push on, we picked our way up to the summit and the view that unfolded on the summit was simply stunning!!

Standing on top of a peak always puts life in perspective and makes you realise how insignificant we really are. It makes you remember that in spite of all that may seem wrong in the world, we are surrounded by beauty and are so lucky to experience living on such a magnificent planet. Love life, focus on the good stuff and don’t waste a minute.

Taking far too many photos, we admired the view for a few moments longer and had a big hug before working our way back down.

We made our way back along the ridge and dropped back down to the Chamossière lift before descending the slippy gravel track to the Lac du Joux Plane.

As we sorted ourselves out at the van, we agreed that on the next peak we’ll give ourselves more leeway, take a picnic and spend a good amount of time enjoying it at the top! C’est magnifique!

The fun wasn’t over for me though. The road home took us past the highest point of the bike park trails in Les Gets and with the lifts closed and my bike already in the back of the van. It’d be rude not to take advantage of all that lovely gravity on hand. Nina dropped me off and I grinned my way back down the trails to Les Gets!

I rolled up at school with 5 minutes to spare before home time! What a morning!