I’m coming to the conclusion that in France… I may be Borat.. 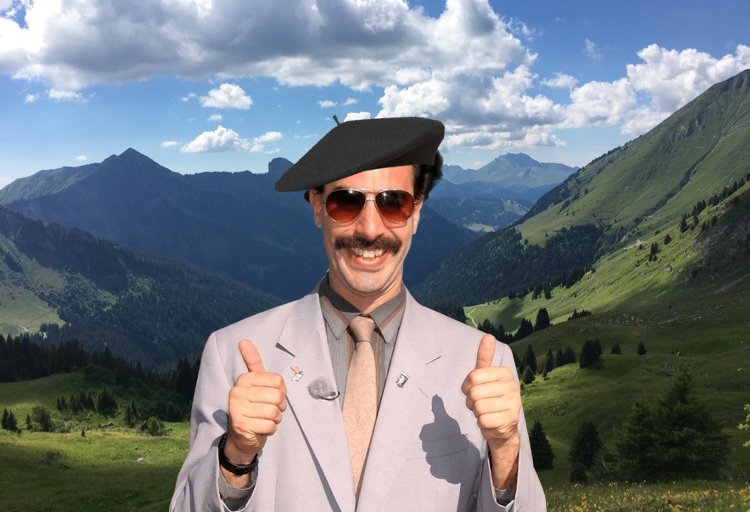 I’m coming to the conclusion that in France… I may be Borat!

The kids are practically fluent in French with zero accent and have been for years now. They have a bit of a vocabulary disadvantage as we can’t help out as we can in English (limited there too, TBF) but other than that, incredible! Nina is flying too, with her A level French as a springboard and a head for language, she’s nailing it and is regularly complemented by the Frenchies on her spoken French…

I… On the other hand, found languages a struggle at school. They didn’t ‘click’ and still don’t. I have improved a lot and am determined to keep doing so but when I actually replay the conversations I’m having in my head, I’m hearing Borat!

Obviously I’m speaking broken French with an English accent rather than broken English with a Khazak accent but you get the idea. Imagine everything you read in this post, written in italics, with a Borat accent…

You’ve got the standard.

Now translate that into English and add Borat’s accent!..

Now picture this… If I’m flustered, I can repeat things incessantly! In an attempt to smooth the way I’ll nod enthusiastically with a vacant, slightly crazed grin.

If I play football with the kids and friends after school I will regularly congratulate them on a goal.

Recently, I went into town to look at some bike kit for T and was chatting away enthusiastically with the French owner of the shop.

“Yes, yes, I like, this is very nice, I like very much, how much? Yes, yes, I like.” (Grin, grin, nod, nod). Then I throw in some advanced shizzle: “Je reviendrai plus tard avec mon petit fils pour l’essayer” (“I am going to come back later with my little boy to try it on”).

Get in son! Well done! Future tense… Pretty sweet eh?.. Nope, not judging by the puzzled expression on his face as I left.

I went straight to another shop and ran the conversation past a bilingual mate.

Aha!.. Of course. Puzzled expression explained and a schoolboy error on my part.

The same mate then went on to tell me a story about someone else he knows, who, when asked what he did for a living was replying by telling people he had a few rental properties that he owned and managed.

In reality, in French and for 10 years until someone finally explained, he had in fact been telling people that he owned and ran a chain of brothels!! Haha!

That made me feel a little bit better but some of mine aren’t actually that far off!

That’s a while back and the police haven’t knocked at the door yet, so I think I’m in the clear.

The look on my own kids faces when I asked them if they wanted cucumber (concombre) for lunch is etched in my memory.

Apparently, my weak pronunciation of the ‘mbre’ part puts me in double filth territory! I thought I was saying what I’ve just written above but they were hearing “con con”. I won’t go into detail in English but I was spouting some pretty robust profanity to them, not once, but twice. In fact, faced with the response, I went into grin, grin, nod, nod repetition and kept going trying to get it right until I got an explanation!

Ah well, you don’t make an omelette without breaking a few eggs and whilst I’ve broken quite a few, I’ve come a long way.

I need to go further though… Iz is getting teenagery and I could do with knowing what the heck they’ll all be jabbering about. I dread to think what ‘faux pas’ I’ll commit in this next few years. It’ll be like ’embarrassing dad’ on steroids! I’ll keep you posted.

We wrote a post a while back on free French learning tips. If you want to check it out, it’s here.

Oo. If you live out here as well or spend time in France, next time you replay a conversation in your head, add the accent. You might just realise that you’re a little bit Borat too 😉