BIG day out on the bikes: Les Gets to Châtel (inc River Gap! Wahoo!) and back. 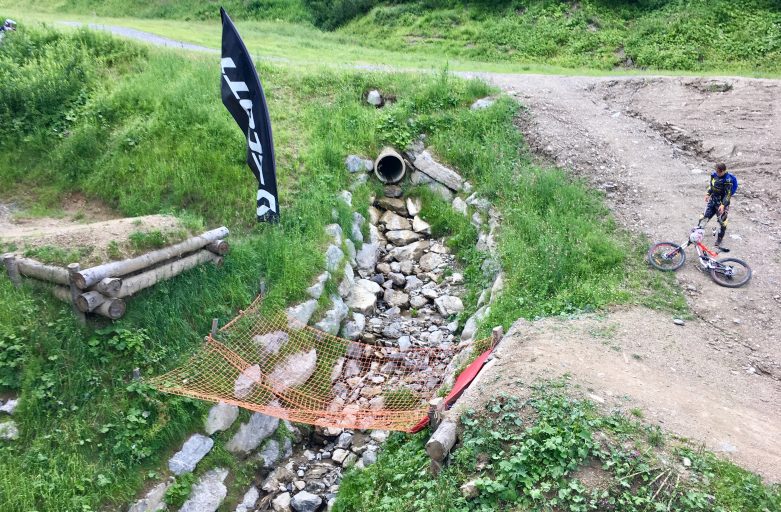 Great day on the bikes from Les Gets to Châtel and back? Did I mention the Châtel River Gap? 😉

I’ve pretty much bored the pants off anyone who cared to listen or couldn’t get away fast enough.

Anyway… Before you go, it all began in the summer of 2016. Just a few months after we’d first arrived here in the Portes du Soleil. I’d been introduced to a new biking buddy and he’d immediately suggested a trip to Châtel. I’d heard there was some gnarly stuff over there… There is!

We met up soon after and drove over to Lindarets before getting the chairlift up and over into Châtel. We hooned around the place for a bit and halfway down an unsuspecting blue trail, my mate pulled up and pointed out a sizeable gap jump… over a river bed! He said, “Would you mind getting a photo of me jumping it?”

We rode the lift back up and he said: “Give me a ring when you’re in position and ready. I won’t answer but I’ll set off.”

“No probs, bud.” I pedalled off feeling pretty nervous for him and thinking about what I’d need to do if this doesn’t go to plan. I got in position and gave him a ring. It rang once and cut out…

“Hmmm” I thought… Wonder if he got that?

I stood there for a while with the camera pointed at the jump but there was no sign of him.

Lowering the phone, I clicked to give him another ring and just that second he came hurtling round the corner, launched the jump, sailed through the air and landed perfectly. “Did you get it?” He shouted as he sped past…

We went back a few weeks later and I got the shot! I remember thinking there’s NO WAY I’ll be doing that.

Well… Two seasons on and after steadily progressing and gaining confidence on bigger features, I had a feeling that our only trip to Châtel this year might be the one.

We’d pencilled in a day to do it and rode out from Les Gets up the Chavannes and down over to Morzine. We rode through town, up the Super Morzine and Zore lifts before a few laps on the runs into Lindarets. Here, we jumped on the Chaux Fleurie lift and up to where Nina and Iz did the Fantasticable. We then headed for the ever popular green ‘Panoramique’ – great fun for all the family.

Every time we go to Châtel, my mate likes to hit the river gap and he wanted to get it done and out of the way early doors. “Are you going to do it?” he asked. (Man! It’s making my heart pound just writing this!..)

“I don’t know.” I said. “I’ll follow you in and if I clear the last tabletop OK, I’ll know I’ve got good speed and I might go for it…”

We took a deep breath, checked the Go Pro was recording and dropped in. We built good speed through the trees over the little stream gap and into the table-tops. I landed well on the transition of the last table and was lined up nicely for the gap. Split second decision. Screw it, let’s do it!… The kicker reared up fast in front of me and.. Shhh*******… Touch down!.. Made it!!

It was about five more corners before I’d gathered myself enough for a “Wahoo!” and for the next 20 minutes I was totally fizzing with adrenaline!

I’ve learned the hard way that my riding can go to pot after a big high like that and luckily it was lunchtime so we headed off for a bite to eat and a calm down.

It’s a really addictive and rewarding aspect of riding: Finding a new feature, fearing it, looking at it, sussing it out, talking to people about it, practicing elements of it, improving your riding until you’re confident you can do it, trusting your judgement that you’re ready to go and finally letting it all go and going for it. If it works out, it feels awesome… If it doesn’t, it usually hurts!

Anyway. It worked and I was feeling awesome! We snaffled a burger at La Folie des Neiges and set off for a warm up run along Serpentine. We fell in behind a couple of guys over the roller jumps and all of a sudden ‘CLANG!’

I’d clobbered into a rock and popped my back tyre. The lads in front stopped and said: “There’s a big rock back there in the middle of the trail.” We had often seen people fixing punctures in this exact spot but never knew why. We did now!

I was already running with a bodged repair on my rear mech and only one gear. Taking the back wheel out to fix the puncture ruined the bodge and I ended up having to take it AND the chain off. That’d be me riding chainless for the rest of the day then. At least it’d be nice and quiet though and good practice for my pumping / flow skills.

We dropped back in and had fun down the rest of the trail but could do with getting to know it a bit better to get the best out of it. By the time we got the bottom, we decided it was probably time to start making our way back towards Les Gets.

Back to the Fantasticable (Nina and Iz did it a few weeks ago) and down the Chesery trail to Lindarets, back up the Lindarets lift to Avoriaz and then down a new green run to the bottom of Serrausaix. All in all, a fun little trail. We caught the Serrausaix lift up and pushed up to Tutti Fruity before dropping off to the right over the tables and back down to Super Morzine.

There’s three main options from Super Morzine: Take the bubble lift back down, ride on the road or go down the gnarly black run under the lift.

We love this run as it’s steep, rough and rutted and you have to stay fully switched on. By the time we popped out at the road, my brake fluid was boiling and back brake had stopped working. We took a few minutes to let it cool before dropping in for the second half.

Great stuff. Fast and rowdy with your mind and body reacting to things before you consciously realise what’s going on. We popped out in Morzine and the road felt super smooth and peaceful. We pushed across the François Baud bridge and scooted through town to the Pleney. Made it!

Last blast back over to Les Gets and home in one exhilarated piece!

A brilliant day out and we agreed we should defo have another one over there before the end of the season. That never happened… See you next year, Châtel. Well… We’ll be seeing you in the winter!