Nina and Iz take to the skies on Fantasticable Chatel!

The Fantasticable Chatel has been on our to-do list since we moved to Les Gets. So… this week we decided it was high time we got up there and gave it a go!

T’s still too light to do it unfortunately (the minimum individual weight is 35kg). I was too heavy to do a ‘duo’ with Iz (max weight difference is 40kg), so Nina reluctantly agreed to step up to the plate. A canyon swing in New Zealand 10 years ago left her with (previously non-existent) height wobbles, so she’s always a little hesitant to volunteer these days.

Fantasticable Chatel is a two span zipline that straddles the hamlet of Plaine Dranse above Châtel. The start point is on the ridgeline between the Lindarets valley and the Pré la Joux area of Châtel and is accessible from either side. The first descent runs across the valley towards Tête de Linga. Here, you stop, unclip and clip on to another cable which runs back across the valley towards Col de Bassachaux. A 10 minute walk takes you back down to Plaine Dranse, the bottom of the Rochassons lift and a ride back to the beginning.

The zipline runs in both summer and winter seasons, and in winter they send your skis or snowboard across after you. This means that you can strap back in and get back to sliding after your flight!

Having been put off by big queues in the past, we wanted to get up there bright and early. Preferably as close to the 10.00am opening as possible. We set off from Les Gets, drove down to Montriond, up past the lake and through Lindarets goat village before parking up 25 mins later in the lift base area at Les Lindarets.

T and I unloaded our bikes so we could have some fun as well. We all boarded the Chaux Fleurie chairlift for the magnificent, scenic ride to the top. Nina was noticeably quieter than usual as we wandered up towards the ticket office and the launch pad.

We stopped to watch as a woman rocketed, head-first, across the valley and Nina dropped another shade down the pasty colour chart. The girls joined the queue to pay and were kitted up with harnesses, hair nets, helmets and goggles. A couple of minutes later, they were waddling out of the hut with trolleys in hand to join the back of the queue.

With about 2 and a half minutes between each departure, we weren’t far off our half hour guesstimate when they made it to the front of the queue. Ample time for the kids to rib Nina about being sick on the way. Amusingly, Iz wound her up even more by kissing us goodbye properly ‘just in case’. Haha! That’s my guys!

Their harnesses were connected to the cable, suspending them in the air in the prone position. After receiving the ‘all clear’ on the radio, the friendly operator pulled the pin and bid them farewell.

T and I watched them speed off into the abyss before grabbing our bikes and heading off to meet them. We had some excitement of our own down the super-fun ‘Panoramique’ trail on the way.

We met them walking down the road to Plaine Dranse and thankfully Nina had returned to normal colour. Iz was sporting a big grin and carrying an official action photo (€13) of the two of them mid-zip. T had done a rock drop on the way down Panoramique and we had to wait for him to calm down and stop jabbering before the girls could get a word in edgeways.

It turns out it was a calmer, more peaceful experience than Nina had been expecting. A gentle start before accelerating steadily towards nearly 100 km/h in the middle then decelerating before the end. They had a short walk to the second span before doing the same again. Apparently the scariest bit was coming in towards the end whilst still carrying some significant speed.

We grabbed some lunch at La Folie des Neiges then T and I had a couple more runs on the bikes on the way back to the van. To top it off, the kids had a refreshing swim in the stream at Lindarets to cool off. Magic.

Here’s the link to Fantasticable Chatel if you’d like more info. Current (2018) prices are €36 for a single and €72 for a duo flight. Show your Multipass or valid mountain bike (VTT) lift pass for a 10% discount.

Job done for the girls. I might just have to go back and do a solo mission whilst we wait for T to gain another 10 kilos! 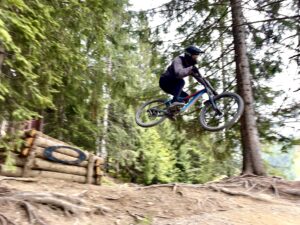 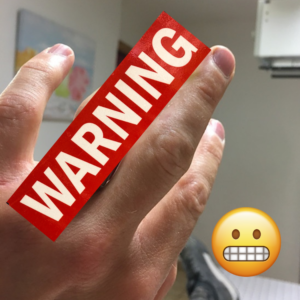 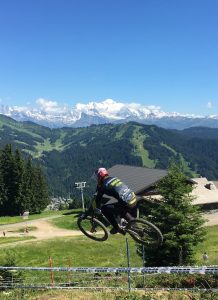