More than we bargained for on our Swiss family ski tour. 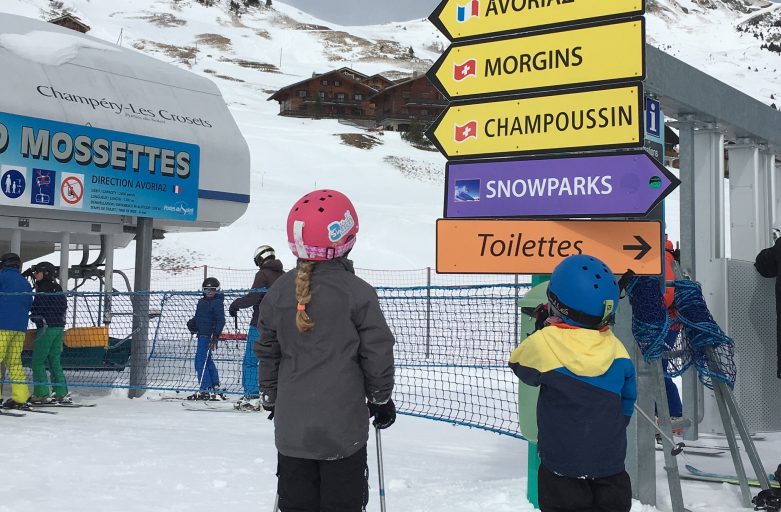 Somebody (me!) had the bright idea of a grand tour, skiing/boarding from Les Gets to Switzerland and back for the last day of the kids’ school holidays. Predictably, the weather waited until we were as far away from home as possible before it turned worse than expected. Some of the lifts closed and our day turned into a bit of a mission.

The kids are getting pretty blinking decent at skiing now and we’ve been looking forward to covering some distance with them for a while. They’ve had ski lessons all this week which ruled out a full day together but the forecast looked reasonable for today. We figured it would be a brilliant way to end the hols and give them a new experience of covering some serious mileage on lifts and skis.

We set the alarm and got up early. An hour later we were fed, dressed, packed-up with passports in pocket and on our way into Les Gets to catch the Chavannes Express chairlift. There’d been snow overnight and it looked like there’d been a bit more than expected. It was the same deal with the blue skies and the conditions were looking pretty tasty! The weather was forecast to get worse in the afternoon with moderate snow and a bit of wind but it didn’t look too serious.

We rode across to the Folliets lift then down the blue Morzine ‘B’ run to the bottom of the Pleney lift. We hopped on the ski train across town, then caught the Super Morzine bubble lift up to The Zore chairlift and boarded that too. We descended the long tedious green to the Proclou lift. The visibility was excellent and with reasonably clear blue skies, we were being treated to magnificent views of the peaks, ridges, cliffs and valleys around the Portes du Soleil. As we rode the Proclou, Avoriaz came into view and the moaning and bickering started. The kids were beginning to run low on energy and it was manifesting in sibling button pushing and excrucuating high-pitched wingey voices.

We quickly stuffed in some chunks of breakfast bar to counteract the symptoms and set our sights on the Cookie Café at the top of the Mossettes lift for lunch. The descent down ‘Mossettes’ into the Lindarets bowl was magic! There was a lot of fresh powder here, it had stayed nice, cold and fluffy and was easily accessible by just dipping off the sides of the pistes. The kids are full-on powder hounds already!

We caught the Mossettes lift which provided a ringside seat for watching some dedicated free-riders traversing beneath the Pointe de Vorlaz to find and rip fresh lines, drop windlips and spray enormous rooster tails in some magnificent looking powder conditions. It looked awesome!

We had a much needed lunch stop in the Cookie Café perched on the shoulder of Pointe de Mossettes (the burgers were surprisingly good, FYI). As we ate, we could see menacing clouds building in the West. We finished up and emerged from the cosy cafe cocoon to very different conditions with a howling wind and driving snow.

Our tour wouldn’t be complete though without a proper ski in Switzerland, so we battled the wind along the ridgeline and dropped down into Les Crosets. The plan was to work our way across to and catch the lift up and over the infamous 40° plus Swiss Wall. We wanted to let the kids have a look at how steep it was and hopefully get a good view of a few people testing their mettle.

We caught the Crosets chair to start linking our way towards the Chavanette lift above the Swiss Wall and back over into France but as we ascended on the chair, the wind seriously kicked off! We realised this was way stronger than forecast and there was a high risk they might start closing lifts. The Swiss Wall would have to wait for another day. We needed to get back into the Lindarets valley and the French side of the border ASAP!

It was getting pretty wild and the kids were a bit scared. It got worse as we gained height on the Swiss Mossettes lift and our run down the ridge from the top was accompanied by one of the loudest, creepiest, howling whistling winds I’ve ever heard and only a few feet of visibility. If you’ve done the run down from the Mossettes, you’ll know the top is quite often wild and the descent to Lindarets is a pain in the backside with numerous flat spots and repeated scooting/shushing required. These flat spots were magnified by a driving headwind the whole way down.

The kids’ emotions fluctuated between excitement and terror as we coaxed and encouraged them all the way down. It was a relief to see the Lindarets lifts come into view but the relief was short lived as we noticed that the Chaux Fleurie and Lindarets were closed and there was now a massive queue for the Prolays lift back to Avoriaz. We slotted in and crept forward slowly. When we eventually made it to the top, we were greeted with more high winds, driving snow and low visibility. We snaked down the busy pistes with me taking the lead, the kids staying super close and Nina bringing up the rear. We slid alongside the Chappelle snowpark with the intention of ducking under the road through a tunnel and down the Lil’ Stash run towards the Seraussaix lift and on towards, Zore, Morzine and home.

No such luck! Those lifts were closed and the tunnel was fenced off with a pisteur on guard to reinforce the point. More and more people were beginning to funnel into a similar pattern as us and we joined the hoards making their way towards the Prodains lift and the bus service at the bottom. It was a unanimous decision to ride down the piste rather than take the cable car and we had a great fun family blast to the bottom with the kids joining us in hooning past lots of people on the way down.

As we’d feared, the queue for the bus to Morzine from the Prodains lift was substantial and we joined the back, shuffling forward patiently. We quietly grumbled in agreement with the murmour that passed through the queue as the odd person brazenly walked straight to the front of the queue when the bus pulled up and climbed straight on! Cheek! The wait was a bit of a hassle but the kids were happy (they love a bus), we were out of the wind down here and as we waited, it started snowing so hard that everyone in the queue quickly got covered in a thick white fluffy coating. Come on! Keep it coming!

We squeezed into the bus like sardines and wound our way down to Morzine before spilling out at the base of the Pleney lift. We rode up, stepped out at the top station and that was it! We were home free. From here, we could ski all the way back to Les Gets without needing another lift. Our fate was in our own hands again. We took another lift anyway for a better, steeper, less tedious run back to Les Gets. (The first – and last – time I took the link run back to Les Gets from the Pleney, I vowed to try and avoid it at all costs in the future!).

We arrived back in Les Gets just before 5 o’clock. We’d set off at 9.30am and the kids had been wind-lashed, scared, hungry and thirsty and on a rollercoaster of emotions. As we skidded to a halt at the bottom of the slopes, the kids piped up: “The drag lift is still running! Can we have a few goes before we go home?!.”

You sure can… That’s my guys!

We’d had a fantastic family day out. It’s great with a few challenges, too. We had highs, lows, excitement, speed, powder and the kids managed to overcome a few negative mental spirals and get back in the game which must be a good thing. Hot baths all round and a perfect end to the hols!