Would today be the day we finally make it up the Aiguille du Midi? 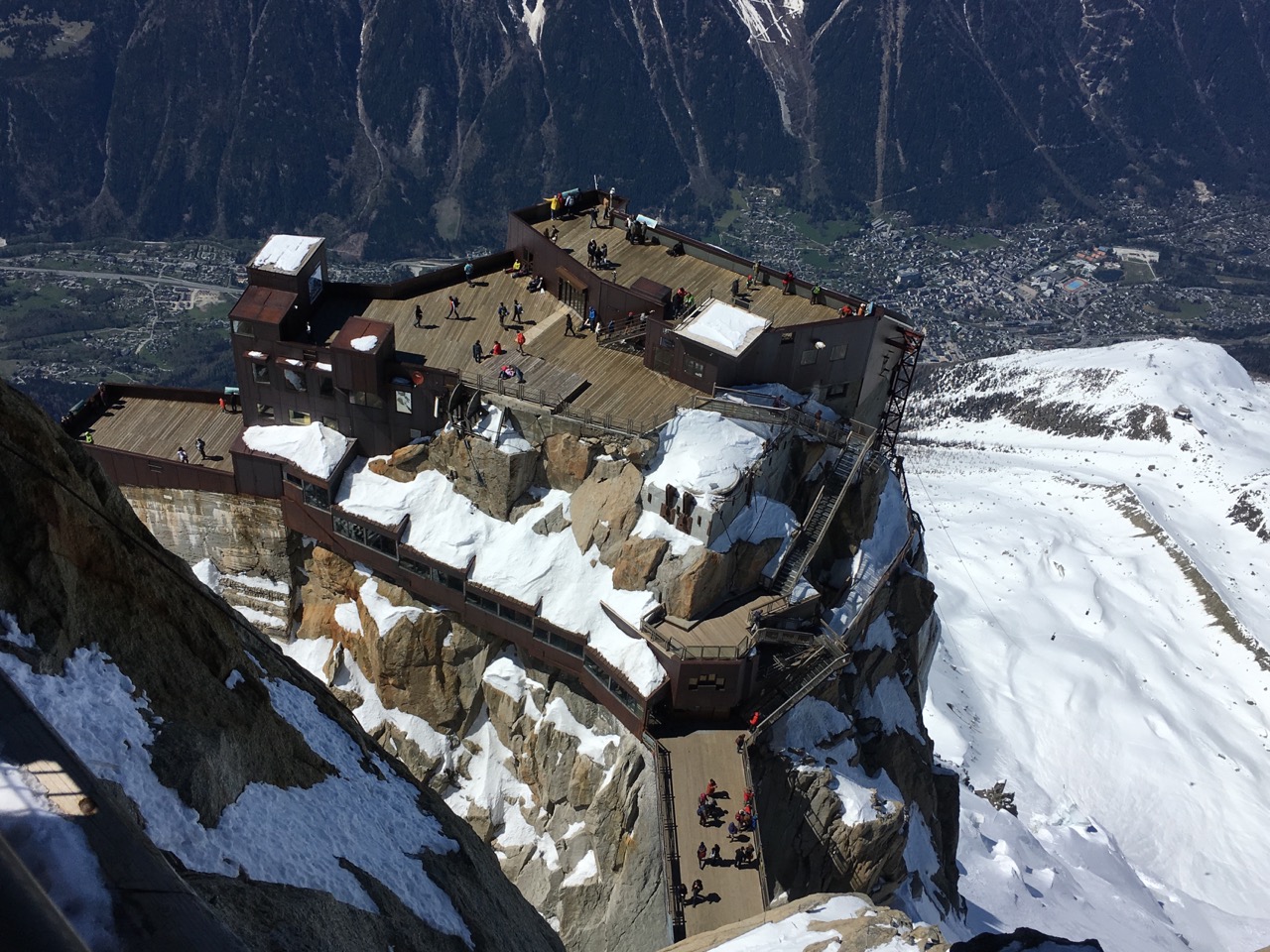 As you’ll know if you’ve been reading, we’ve been wanting to go up the Aiguille du Midi telepherique for years. Previous attempts have been thwarted by time, queues and the last time, by too much wind! (in the atmosphere…)

As we dropped the kids off at school on Monday this week, we found out that Thursday was a bank holiday and school is closed on Friday as well. Terrific! After picking them up at lunchtime on Wednesday they won’t go back until Monday… Apparently there are ‘about’ four bank holidays in May so we need to get our fingers out, nail down the number and find out when the others are so we can be better prepared next time.

On this occasion though, the stars had aligned. The first job is always a quick look at the weather forecast and after a few miserable days of cloud and rain, snow-forecast.com was showing two big, beautiful sunshines in Chamonix for Thursday. Mission Aiguille du Midi was on.  We ran the plan by the kids over a baguette-based lunch on Wednesday, half expecting “Awwwww! Do we have to? Why can’t we just go to the park? It takes ages to get to Chamonix!” but instead we were met with a chorus of “YAAAAY!!”…  Come on!

We were up early-ish on Thursday after an impromptu BBQ and late night at our friends’ house. We had breakfast and packed plenty of warm gear for the top. If you’re not familiar, the Aiguille du Midi is a peak in the Mont Blanc Massif. It, along with Mont Blanc and a range of other peaks and ridge-lines, tower above the cosmopolitan town of Chamonix which is a mecca for climbers and Alpinists. It really is an awe-inspiring destination and with glaciers, hanging glaciers, seracs, morains and freeze-thaw action, in action, it’s a GSCE geography teacher’s dream!

A lift to reach the Aiguille du Midi has been in service since 1955 and as well as the score of tourists, it offers mountain dudes access to high mountain terrain, and descents such as the famous Vallee Blanche. The lift is in two parts and rises from 1030m in town to top out at 3842m. A network of tunnels, platforms, stairs and bridges allow you to explore every aspect and vista without having to risk your neck. There’s even an elevator within the rock which takes you up from the level of the telecabine station to the very peak of the Aiguille du Midi.

The air is thinner at this altitude and some people can feel very unwell or even pass out as the lift arrives at the top. They have to sit down, stay on the cable car and head back down to re-oxygenate their system. At €58.50 a head I wonder whether you get a refund if you don’t get off?.. Nina was feeling a little delicate after last night and we were hoping we wouldn’t need to find out.

We set off from home and hopped back over to Taninges then Cluses and along the A40 towards Chamonix which is lined by peaks, cliffs and breathtaking waterfalls that look like something out of the lost world and got the ‘epic’ juices flowing nicely for the main event. Less than an hour later, and 15 minutes after the kids had started counting to 60 repeatedly, we pulled up in the lift car park and stretched out into a balmy spring day with brilliant sunshine and wall to wall blue skies. Perfic!

A 30 minute queue at the ticket office and €175.50 later, (ouch!) we were in possession of a set of family lift tickets. We grabbed a bite to eat at a cafe ’round the corner and a couple of chuppa chups to stop the kids’ ears hurting on the ascent.

Fed and watered, we filed into the lift station, through the barriers and joined the crowd waiting for the next lift. The lift doesn’t hang about and is on a ten minute cycle, so just a few minutes later, we were shuffling into the cable car and squashing up for our turn. We were near the back of the queue though and the kids ended up with a great view of 63 pairs of knees on the first ascent.

At the intermediate station we got to the front of the queue for the next lift to the top. The liftie unclipped the rope barrier and we spilled in for a great spot at the front to watch as the cables whirred into action and the imposing, granite peak reared up and rushed towards us. The cable car rises into the station at a steeper angle than we’ve experienced before and it bumped and bounced around as it settled at its destination, kicking off a chorus of yelps from its human/sardine cargo.

The doors opened and we all shuffled excitedly into crispy cold air and the insides of a rock-lined tunnel. This was brilliant! We were straight into the mountain. We walked through the passageway and I made the mistake of walking out into the bright sunlight, straight over to the handrail of the connecting footbridge and leaning over for a look. In hindsight, I should have stopped for a minute to take in the immediate surroundings and the wider view first. The thinner air, the cold and the sheer scale of the drop below all conspired to give me the wobbles and I had a mild internal panic that after all these years of wanting to come up here, I was going to have to turn around and head straight back down on my own.

Luckily, the kids snapped me back into line by darting about, reaching through the railings, picking up handfuls of crusty snow and throwing it at each other. Time for an ‘Oi!’ and a quiet word or two. Balance restored…

We set off to explore the various levels and viewing platforms and gazed in awe at the magnificent vistas in every direction. €1 in the binoculars revealed numerous ‘dots’ making their way to the summit of Mont Blanc or back down again. We worked out where we’d been the day before. We’d hiked up Mont Chery in Les Gets and even though it’s nearly 500m higher than Ben Nevis, it looked like a little pimple from here. It was cloudy below us in the direction of the Swiss/Italian border, which was lovely to look down on, and a few larger peaks were jutting through the fluffy white clouds. (Nina read on the way home that going before 9.00am is best as there is less cloud cover).

The kids started to get bored and we went into the cafe for a hot drink before Iz and I went for a loo break and made a point of running up and down the stairs to test the effects of altitude… Significant, as it turns out! We crossed the bridge to the main peak and joined the queue for the double Schindler elevator to the summit viewing area.

I’d been particularly excited about this as this is where the wingsuit pilots jump from. No sign of any today though unfortunately. We oohed and ahhed and snapped photos in every direction. Feeling so small and insignificant in the face of such vast scale and natural beauty never fails to make you appreciate life and the opportunity to experience it.

The queue for the suspended glass box ‘Step into the Void’ photo point was long and slow so we decided to skip that this time and after 2 and a half hours up there, the kids were ready to go. We boarded the elevator back down and crossed the bridge back to the lift station, lingering at every window to squeeze as much awe out the experience as possible.

The birdmen of Aiguille du Midi

We were following the signs for ‘Chamonix’ and as we neared the lift we passed another set of doors to another viewing platform. Nina and the kids were ahead and climbing a set of stairs but I had an urge to dart back for one last look outside. As I stepped out, I glanced back up at the top platform and a grin hit my face in a nanosecond. There were two wingsuit pilots perched outside the handrail next to the glass box getting ready to jump.

I dipped back inside and shouted up the stairs after Nina and the kids. “Quick! Wingsuit pilots!” They ran back down and we waited and watched for a few seconds before they counted down “trois, deux, un!” and leapt. Awesome! I had an adrenaline rush just watching. They dropped headfirst gaining speed and lift before rocketing off and banking right, around the mountain and off into the distance. The sound was fantastic, a rushing whoosh just like a jet plane.

We got back in the queue for the lift down, buzzing with excitement and reviewing our rushed and slightly pants footage before boarding the next car down. We couldn’t believe it. I’d already been thinking to myself, I’d need to go back to the Aiguille Du Midi to see them next time but we managed to catch them at the last minute! Amazing! The perfect end to an excellent day out.

Check out our wingsuit footage and the rest of our day below: